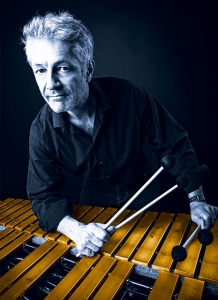 For his ongoing project Voyage (pronunciation Française) and its current incarnation Voyage West vibraphonist/composer Stefan Bauer surrounds himself with musicians who share his inclusive aesthetic and who play with inspired ease and intensity. Voyage West’s musicians represent an illustrious, communicative and international group (NY, Canada, Germany, Israel, The Netherlands/Korea) with decades of collective experience as jazz musicians and world travellers. This is reflected in three CD’s to date with this format (with varying/changing personel/line-up): ‘VOYAGE’, ‘GEOGRAPHIA’ (both on JazzHausMusik) and the new ‘VOYAGE WEST’ (Dot Time Records). “The goal,” says Bauer, “is to create music that draws the audience along with us as fellow explorers on a borderless journey – both sonically and culturally.”

As a conceptualist, he favors the quintet format because it gives his writing numerous possibilities regarding color-combinations and formats (solos, duos, trios, quartets) as well as powerful ‘tutti’ playing. Bauer’s composed framework sets a tone and provides a musical narrative that invites his extraordinary musicians to partake in improvisational excursions of high flight and deep emotional intensity. Composed and improvised passages meld into a profound musical experience that takes off on a ‘magic carpet’ whose fabric is weaved from the thread of a tuned-in audience’s act of concentrated listening: the unifying quality of music at work, an event in which everybody becomes a participant!

Based on Jazz as a common language (if not in a traditional sense, in spite of each members credentials within the mainstream area) Voyage West’s program consists of such diverse sources as North American folk songs, musical elements that Bauer brought back from or was inspired by travels to India and Africa, a few re-arranged standards, pieces written by his co-musicians and of his own musical works about which the Rheinische Post/Germany writes:

“… In his compositions there are romantic and impressionistic elements, enriched by sharpness and formal awareness, and by magnificent sounds full of fantasy.”